Home
BLOG
What Are Paintballs Made Of? Are They Toxic To Humans? Guide

Playing paintball isn’t as much enjoying if you don’t know about its basics. One of the most important thing in this sport is paintball. It’s usually a pellet which will leave you with a mark in case you get shot. The question here arises that, What are paintballs made of?

A paintball simply is made from a shell and the fill. Shell is made up of gelatin material whereas the fill can contain water-soluble solvent along with PEG. Also, paintballs are non-toxic to humans. However, they are not good for children and pets.

I know that many paintball players will ignore this question as they will focus only on playing. However, it is necessary to have enough knowledge about the bullets used in this sport.

That’s why I am about to write a complete explanation article on what actually are paintballs and what they are made of?

So, keep your eyes open while reading this article as you can also know about another question which is about their toxicity.

So, let’s head towards the main topic without any worries:

Paintballs are actually pellets or round ball type ammo used in beating down your opponent. They are used in paintball guns only. Once, a paintball gun gets you, it will leave a mark on your paintball uniform which will mean that you have been eliminated from the tournament.

In some rare cases, it is also probable that a paintball pellet will simply bounce off from your uniform without leaving the mark. It will mean that you have been given another chance to prove yourself on the field.

Internal Structure of a Paintball:

Taking a look at internal structure will show you two most important parts of a paintball i.e. the shell and the fill. The shell of a pellet is actually the outer portion that is going to burst once it hits the target. On the other hand, the fill of a paintball pellet is a dye or a solvent which will leave a mark on your uniform once you get shot. 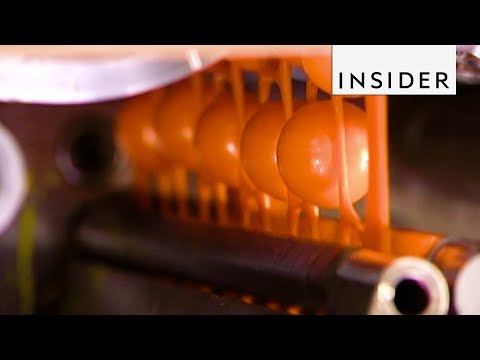 What Are Paintballs Made Of

Basics that You Need to Know About the Shell:

As I have mentioned above, a shell is the outer part of a paintball and it will burst out once it hits the target.

However, it has been made of different components which are as follows:

Most commonly, the shell of a paintball pellet is made with a sticky substance known as gelatin. You must think of them as a large capsule which has been refilled with solvent or dye and it is going to break on a heavy impact. In short, a shell is a component which is moved forward by the carbon dioxide tank of the paintball gun.

On the other hand, you should also keep in mind that before the use of gelatin shells, paintballs usually consisted of thin glass materials which were of course injurious. However, at that time such paintballs were used to mark cattle or trees only. That is, they weren’t used for sports purposes.

Gelatin has indeed got a lot of properties, but one of the most amazing ones is that it has got the tendency to absorb water once it hits the ground. In this way, it can get swelled and you simply can’t use them again and again. This is the main reason, why many senior players will advise you not to use the pellets from the ground.

Swelling is not so good for your paintball gun as it can get jammed in this way. It can also get burst in the barrel off the gun which itself is a great mess. So, refrain yourself from using pellets especially if they are damp.

To keep things more simple, you should just leave the paintball once you have dropped them due to an error. The best idea will be to recover them as soon as possible, but leaving them would be better for you.

Solution to Overcome Wetness of Gelatin:

If you have got a lot of paintballs wet because of a mistake or an error, you can recover them by following an easy solution. Simply, expose the wet paintballs to the sun as in this way the gelatin material can regain its hardness and will shrink as well.

Easy Solution to Recover this Issue?

In case you are wondering about the easiest solution to this problem, simply buy the paintballs just a little time before the competition starts. In this way, the paintball guns can easily regain their original shape and you will be able to get the best out of them as well.

Important Basics You Need to Know About the Fill:

The fill is actually the liquid or solvent contained inside the paintball. It is, in fact, surrounded by the shell which when burst out will leave a mark on your body. In case, you are wondering about what actually marks you, it is the fill inside the paintball which leaves a mark.

The consistency of the Fill:

Keep in mind that the consistency of fill is more considered rather than the shell itself which is made of only gelatin material. Contrary to that, the most commonly used paintballs have got water-soluble dyes in addition to polyethylene glycol (PEG). The water-soluble property will allow you to rinse the paint with ease.

Freezing of a Paintball is a Myth:

PEG has got a lower freezing temperature than that of water. It can freeze at around -15°C which makes sure that you will never face any freezing issue even if you are playing the game in extreme condition. It is in fact only a myth that a paintball can get frozen. In reality, nothing such a situation can happen because PEG is there to prevent water from getting frozen.

It is still possible that some old-fashioned paintballs can get frozen, but you cannot face such issues in modern paintball pellets for sure. They will get a shrink or deformed easily, but will never get frozen because of PEG.

Some cheap variants of paintballs are also in the market that usually consists of oil-based fill. However, it is recommended not to use such paintballs as they are a risk to your paintball gun. Therefore, you should invest only in paintballs with PEG dyes.

Another issue with the Oil based fill is that they are very difficult to wash off from the uniform. Not only that but, in case if an oil filled pellet might burst inside the barrel, you will waste a lot of time removing the stickiness of oil from the barrel.

A straightforward answer is NO. Paintballs are never toxic to humans. You won’t even need to worry about paintballs even if some of the paint can get in your mouth as they are completely non-toxic to humans. On the other hand, paintballs with good quality construction are made from food-grade materials which won’t harm you in any way.

However, it is not recommended to eat paintballs. If you’ve eaten a paintball, then it will likely cause a laxative effect on you. That’s why it is always prescribed to keep paintball guns away from children because of choking hazard.

One another thing to keep in mind is, paintballs are really toxic for dogs and cats. You should also make sure that they are kept away from dogs and cats because they are osmotically active and can cause electrolyte imbalance in your pet.

The result can become very fatal if your dog has eaten a lot of paintballs. So, if this occurs, you should consult a vet as soon as possible.

How to Wash the Paint from Paintball Pellets

If you get hit by a paintball pellet and you are wearing normal clothes, i.e. jeans or trousers etc, then it is better to wash such clothes according to the recommended guidelines.

To make sure that you can easily wash off the paint from a paintball pellet, it is always advised to wear a water-resistant uniform. In this way, you can just rinse your clothes and the paint will come off with ease.

In the case of normal clothing, there is no rocket science to follow as well. Once you get hit with a paintball, you should rinse off the paint by normally washing the clothes you are wearing.

An easy solution is to treat your stained clothes with a pre-stain removed and check if it helps in removing the paintball stains. If it doesn’t, leave it to dry naturally and don’t just throw them in the dryer.

However, if a stain is very hard to get off and you are done with pre-stain remover, then you can simply soak your clothes in a water solution for at least half an hour. Afterward, wash the clothes and air dry them rather than throwing them into a dryer.

All the above guides can work to remove the paintball stains from your clothes easily.

Paintballs are simply made up of a shell and a fill. Make sure that you keep them dry and in a good shape before you enter the battlefield. They are completely non-toxic to humans although they are not considered good for dogs and cats. On the other hand, by trying some easy methods, you can easily remove the paint stain from your clothes. That was a short summary. Hope you will follow the guidelines once you have read them.